It's the waiting that'll get to you. Patience is one thing; everyone has patience... but this? This goes even beyond will power. To be... well, to be like me; it takes obsession. The devil may be in the detail, but the mission is in the minutiae. 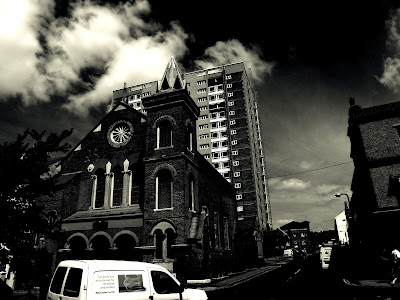 How long have I stared out this window now; in this most unlikely of coffee-bars (which used to be a bank, but now it's trendy and popular). High ceilings and fashionably uncomfortable seats make it a hard stakeout, but that's where the discipline lies.
Seven hours, is that all it's been? It feels longer, but then I have been here over several days and it could easily be said that they blur into one another; and to the untrained eye that could well be the case. I notice everything, however, and everything is noted down.
As impossible as it may seem, this portion of Brighton, this unobtrusive roundabout has its own micro-climate; meteorological, sociological, even political, it's fascinating.
Everyone has their own routines, written in code; colluding, colliding, cunning.. but it's not them that I'm after.
They're welcome to their private hells just the same as I’m in mine. Let them weave their tapestry, though it's almost tragic watching it unravel behind them; the sand of their lives trickling from their unclenched fingers. They don't seem to be aware of the minutiae, but each grain is important.
It's brought me this far, taken me to this very coffee-shop where I'll finally find him and I will not rest until he's right in front of me.

I've been so careful – I have no routines; I come into the coffee-shop at different times of the day and never sit in the same seat twice in the same week (however, it has to be a window seat, that is paramount, otherwise how would I be able to observe?) I alter my appearance every day, speak differently with different inflexions. It's surprising just how little attention people really pay to each other.
I know though, I know... All their routines play out in front of me. Take now... school has broken for the day and they all come shuffling out, the broken products of the system. You can always tell those that have woken up too soon to the reality; they are the loners, the ones who walk with the burden bearing down on them.
The others group together, against the night of adulthood as it approaches them, huddled together laughing, as much to fool themselves as each other that they have a chance. I pity them.... but maybe ignorance is bliss.
Looking around me now I notice that this is so. The coffee-shop is packed, heaving and sighing collectively with the espresso machines; breathing out with the jets of steam, sweating in the heat with that burnt coffee odour hanging in the air like a shroud. If it wasn't critical to my mission I would....
But it is critical. I must stay here until I find him, bring him to justice for all that he has wrought. So I must stay here, endure this for the greater good; no, not for me, for I no longer matter. I swore that I would give my life for her and though I can no longer do that I can still make amends. That much, at least, I can do.

Another fire engine dopples past me in Morse code, a signal against the unbroken background noise of pedestrian despair. Once I thought that even the number of emergency vehicles was a code in itself; that one could decipher meaning from the frequency of taxi's heading in a particular direction off the roundabout like a macabre logic puzzle. These are but a novices whimsy, nothing more, and I am no mere novice. My life is spent in the cold and I have become immune to it.

It's possible to lose all sense of purpose, only the number of coffee cups mark the passage of time. I never sleep anyway; I'm always watching, always aware. He will slip up one day. Will power is being able to outlast your enemy.
Too many people allow the tension to break them. They associate themselves with the other side of the window. There is no reciprocation, no acknowledgement. You are only alive to the waitress who takes your order, and to her you are but another nameless punter, a faceless wallet; the visage on the denuded coins mean more to them.
I am made of sterner stuff, my motivation being the only thing in my life. She would not have wanted it any other way. Justice: the word must have meaning, for what is meaning without action? What is action without purpose?
These are not empty gestures – she would have wanted this. Together we were whole – he must be made to understand that.

Time. My only real distraction, the shop closing. I am the last customer again, I must be careful, be more vigilant. Despite my preparation, my careful planning, this could be my undoing – this might be the reason why he hasn't shown his face again, so I must leave a disappointed man.
A lesser man must surely have broken by now. I must push back the paranoia that is creeping in – he is not aware of me, how could he be? He is not watching me, scrutinizing me as I am him. He will not know about me until it is far too late.
But I can do no more about it now; I must leave, until tomorrow. Tomorrow... maybe then he will make a mistake and then he will be mine...

“Christ, I thought he'd never leave!”
“You'll get used to him... he's harmless enough.”
“He's a regular then?”
“Yeah – you'll soon learn who the harmless one are... I feel kinda sorry for him, actually – it's tragic really.”
“Go on... I always like a bit of gossip.”
“He used to be a writer, believe it or not... Quite famous, actually.”
“Go on – you're kidding!”
“Damian Gilltrapp – heard of him?”
“Yeah – my husband loves his novels! Spy books, aren't they?”
“That's right. Well, he had a wife, very happily married.. then a year ago he was waiting for her in this very coffee-shop, sitting exactly where he sat today -where he always sits now- overlooking the zebra crossing.”
“No.. that wasn't his wife was it? I heard about what happened -she never stood a chance!”
“Well, the taxi driver had a heart attack as she was crossing... but, no... she never stood a chance. The taxi tossed her like a rag doll.. I don't even think she was aware what happened -she was waving at her husband as she crossed.”
“You mean.. he saw it all happen?”
“It was over before he even finished waving... the look on his face was one of sheer disbelief, as if it happened to someone else. The trouble was, there was no one else to blame – the cabbie was dead and it was just sods law that she was crossing there when she was; but it was more than he could handle, I guess.”
“So he's come back here every day since?”
“Every day.. same time, same place. I think he's looking for something, though I've no idea what.”
“What will he do if he finds it?”

The House Of Ideas
I'm a creative, emotive thinker and proud of it. Never be afraid of your ideas - it's ideas that change the world! Check out my website: www.bellkipeg.com